The Firefighting service in the US was based on a paramilitary organizational structure;  the chain of command and its ranks were acquired from the likes of the military.

Firefighters must serve a given period at every departmental level to get promoted. They should also go through interviews with superiors and take written exams before advancing to a new rank in the department.

The fire department is divided into several sections based on their function.

A truck or engine company contains the main vehicles and its EMS and firefighting personnel. A captain or a lieutenant is responsible for leading it. 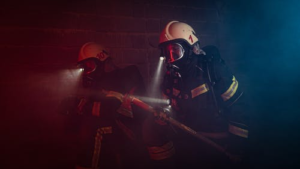 A unit in a fire department is devoted to unique tasks like special rescue forces or EMS. People who work in the units get additional training based on the area they specialize in.

A battalion is an umbrella that houses many fire stations and all their assigned organizations.

Here’s an outline for 7 firefighter rankings that every fire department.

Probationary firefighters, commonly known as ‘probies,’ are firefighters who’ve recently been recruited by the fire department at an entry-level position. They hold the lowest rank in the fire service.

As a probie, a candidate undergoes extensive evaluation and training for six months to a year of their hiring to ensure that their skills and character align with the fire department’s high standards.

Once the probation ends, the probationary firefighters are hired as full-time employees of the fire department.

Firefighters have the responsibility to carry out fire suppression, rescue, and search operations. Typically, every company contains two firefighters. 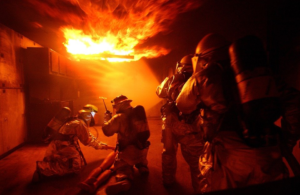 If the driver engineer isn’t available, a firefighter can also run the apparatus.

The salary of the firefighter varies depending on the city and town they work in. It can range between $30,000 and $50,000 on average in moderate-to-large cities.

A lieutenant holds the responsibility of managing emergency responses of specific companies. Their responsibilities also include personnel and resource management.

When a lieutenant isn’t on the site of a fire accident, they are responsible for managing and leading firefighter training and supervising the fire company’s everyday operations. Firefighter training includes teaching to map out local landmarks and buildings to use if a fire breaks out and learning EMS skills.

As they play a vital role in guiding firefighters, they must be well-versed in scene operations’ nuances and should keep up with the latest innovations to guide their subordinates.

If the captain isn’t available, a lieutenant can play the role of an ‘acting captain.’

A captain is an officer with the highest rank who’s present at an emergency scene. They’re responsible for directing operations when they’re needed. A captain is also a spokesperson of the fire department and is responsible for talking to the public and media when required. 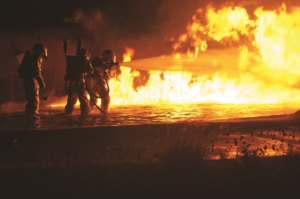 A captain is also responsible for overseeing everyday operations of the fire station and training sessions for the fire company. They get reports from lieutenants working at the fire stations based on which they must make decisions for the department’s betterment. As they have increased responsibilities, they must have excellent management skills.

A captain can also be given the task of EMS or training probies.

Captain working in FDNY earn $149,163 per year. Once a lieutenant is promoted to a captain’s position, they can be considered for the position of a fire chief.

Considered as the top-ranked official on duty, a battalion chief is responsible for personnel management and work schedule creation for fire stations under their wing.

An assistant chief control and manages the daily activities of all personnel assigned in the operations division. This division has the responsibility for disaster relief and fire suppression. A few operations divisions can also contain EMS.

Assistant fire chiefs are also supposed to create programs to improve and maintain the fire department. They assist the fire chief by formulating budgets and proposing an expansion of the department.

A fire chief is the most high-profile position in the New York Fire Department. They’re responsible for the fire department’s smooth operation and managing all the activities and personnel. AA fire chief holds authority in different departmental functions like:

A fire chief can also offer technical assistance to the mayor or city manager and represent the fire service’s interests when planning fire coverage.

Every person in the fire department starts their career as a probie, but they all get the opportunity to work hard and move up the ladder to become a fire chief.

Take the Civil Service Exam and Join the FDNY

Civil Service Success offers prep classes for NYS civil services so that you can ace your civil service exam! Whether you’re planning to prepare for NYC Firefighter Exam, NYS Court Officer Exam, or Suffolk county civil service test, we’ve got the best instructors and prep content that can ensure success. We’ve been preparing aspiring civil servants for the past four decades. We’re well aware of the exams’ ins and outs, and our course content is the best one you’ll find anywhere. Contact us today and let us be your guide to success.