How to Build a Successful Career in the NYPD

How to Build a Successful Career in the NYPD

Are you thinking of joining the NYPD? There’s no denying that it can be a highly rewarding career with many opportunities to grow. Furthermore, you’ll be making a difference in your community through your service.

Whatever reasons you have for joining the NYPD, rest assured that you’re entering the country’s largest police department and the most diverse as well. It’s no surprise that NYPD is as big as it is because the department is responsible for a city of 8.5 million people.

NYPD is answerable for a multitude of tasks and ensures that the city is up and running smoothly and peacefully. As per the official reports, the NYPD responds to more than 500 thousand crime reports every year.

One of the great things about NYPD is that it’s a diverse workforce with the opportunity for everyone to grow if they perform well. Currently, the Hispanic officers make up 30% of the NYPD officers, whereas African Americans make up 15% and Asians making up 9%. 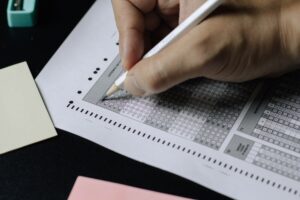 NYPD also has a clear hierarchy based on merit, so you can rise through the rank if you work hard and are committed to your job. However, there’s no single way of becoming successful in the NYPD.

Essentially, you can take three different career paths in the NYPD: investigative, supervisory, or specialist. You can be successful with either of these paths, so we’ll focus on all of them! So how exactly can you build a successful career in the NYPD? Let’s find out!

Essentially, there are two ways of joining the NYPD. You can join the NYPD directly or through the NYPD Cadet Corps. Joining directly means you’ll have to be 21 years old at the time of appointment. However, you can take the civil service exam if you’re 17 and a half years old and only up until your 35th birthday.

Applying directly also means you should have at least 60 college credits with a 2.0 GPA minimum or two years of active military service. Firstly, you’ll have to go through the written entrance exam, which is taken by tens of thousands of candidates.

Standing out in this exam is important, so you should consider signing up for preparatory courses as the opportunity only comes around once every few years. After passing the exam, you’ll have to go through the medical exam, psychological evaluations, and a physical fitness test.

Once you’ve passed all these steps, you’ll undergo drug and alcohol screening, after which you’ll be ready to join the NYPD.

We all have to start somewhere, and if you want to join the NYPD, you have to start at the Police Academy. The academy is a state-of-the-art facility that offers physical and academic preparation for uniformed and civilian members of the NYPD.

You’ll have to be prepared for the rigorous and extensive training you’ll undergo at the NYPD Police Academy. Moreover, you’ll also learn about the latest technology and gain education and tactical knowledge crucial to your job. 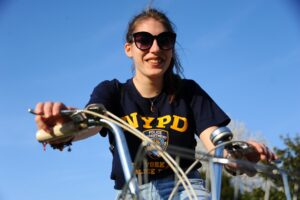 Once you’ve passed, you’ll move on to the next step, which is a full probationary year as a patrol officer in the NYPD.

After completing your training at the Police Academy, you will start your first year in the NYPD as a patrol officer. This year will be all about learning opportunities and your first real exposure in the field. You’ll have to make decisions on your own and be accountable for them too.

Your first year will likely be probationary, which means the PD will have the authority to fire you easily if they choose to. Moreover, your first year will be about your supervisor keeping a close eye on you to make sure you’re doing your job correctly.

A couple of years after you’ve completed your probationary year, you’ll most likely be eligible to make lateral switches from one department to another. For instance, you could consider joining SWAT or the K-9 unit. You can also consider becoming a detective or investigator, as well as numerous other specialized positions. 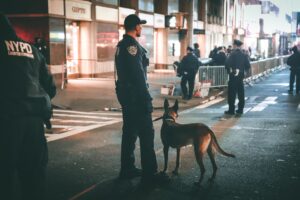 Practically speaking, it’s a good idea to gain exposure in different units and different departments if you want to take your career to the next level.

If you’re not interested in becoming a specialist, you can also consider the supervisory route. You can expect to make your first step into the supervisory arena within five to ten years of your career.

To earn your promotion to sergeant, you’ll have to sit a competitive exam that is taken by hundreds of other police officers as well. Once you make sergeant, you’ll be in the running for the management positions and will probably be given more responsibility.

Once you get promoted to sergeant, your next target will be to become lieutenant, and then you’ll strive for the rank of captain. It might be a relief that these promotions can be earned relatively quickly compared to the move from officer to sergeant. 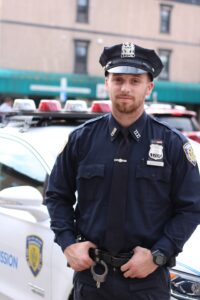 Keep in mind, though, that up until the captain rank, you’ll have to earn your promotion through competitive exams. After this, your promotion will depend on the discretion of the commissioner.

However, you can expect to become a lieutenant after seven to fifteen years since joining as an officer. Similarly, becoming a captain can take between ten to twenty years, depending on various factors.

After captain, you will be ready to take on command, and you’ll most likely be RUNNING your own precinct in the NYPD. You can expect further promotions, but these are more difficult to predict as they depend largely on the commissioner.

However, keep in mind that if you’ve made captain in 20 years, you’re very likely on the right track and will be in the running for other top-rank positions. You can consider yourself successful once you become the NYPD Commissioner because that’s the top rank in the NYPD!

At Civil Service Success, we help you prepare for your future! Whether you’re looking to join the NYPD or the Suffolk County Police, you’ll have to pass the civil service exam in NYC.

We offer expert-taught preparatory courses for exam preparation and offer you advice on how to ace the interview. You can also sign up for other civil service exams in NYS, such as the NYS Court Officer exam or the NYC Sanitation Exam. Contact now to learn more.