When we think of high-risk jobs in NYC’s civil services, we immediately think of the essential work that law enforcement, firefighters, and court workers do. However, what you don’t know is that sanitation workers are also facing difficult circumstances in the line of duty.

To most, this doesn’t make sense because the other professions mentioned above are ones where officers have to expose themselves to criminals or violent individuals. Sanitation work seems like a relatively easy job, with little comparative risk. However, that’s as far from the truth as perceptions could be.

A report published in 2016 by the New York Committee for Occupational Safety and Health (NYCOSH) showed that sanitation workers have job fatality risks that are ten times higher than other kinds of workers. This figure is even higher than what is considered one of the most dangerous jobs: mining.

The question we need to ask is: why are injuries and deaths happening in a profession that’s so seemingly benign and devoid of risk? To understand this, we have to dive into the world of sanitation workers.

Why We Need To Start Thinking About Our Trash

When it’s garbage collection day, most of us don’t have to give a second thought to where it goes. We just throw it down the apartment chute or put the bins out in the yard and let the collectors do their thing. However, this lack of concern can be dangerous for sanitation workers.

There have been multiple incidents of dangerous materials inside garbage bags that have severely injured sanitation workers. A common occurrence is the presence of glass in bags. Garbage workers can get deep cuts from glass that has been thrown into the garbage bags they handle.

There have also been multiple reports of workers getting injured due to syringes and medical equipment that is dumped into garbage bags as well. There was even a case in Brooklyn where a bag containing acid burst and sprayed everywhere.

The Dangers of the Garbage Truck

The garbage truck is an iconic vehicle that every American citizen is familiar with. The process of collecting garbage works with one person driving the truck slowly and the other emptying bins into the back of the truck. The back is open and contains a mechanism called a “hopper.” The hopper crushes the garbage to compress it and transfers it to the back of the vehicle. 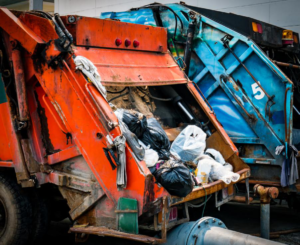 The intense pressure that hoppers exert often makes garbage bags burst and any material inside sprays outside. If the mechanism is broken or faulty, this can cause severe issues for sanitation workers.

There was an incident in Tennessee where two sanitation workers were trapped in the back of a truck when sheltering from the cold rain. Although the compacting mechanism was not being operated, it suddenly malfunctioned and started to operate while the workers were in its vicinity.

There also dangers associated with foot injury due to the workers having to walk back and forth between a large moving vehicle. People often ask why these easily preventable issues are still not resolved.

The problem at hand with sanitation work is that it’s improperly managed. Garbage collectors are being given long routes that practically take about 14 hours long at speeds above the standard limit for garbage trucks. However, according to policy, these routes are theoretically 12 hours long.

14-hour shifts that are scheduled for six days a week also mean that people are overworked. Being expected to complete the same amount of work come rain or shine is causing severe fatigue. Drivers are falling asleep behind the steering wheel, and collectors are often unable to follow protocol due to exhaustion. 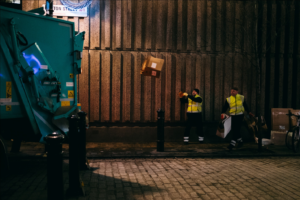 There are also concerns that training for sanitation workers is less extensive than for other civil service jobs, which is worrying. All kinds of city care employees deserve a level of education for their job.

There’s also the issue of faulty and outdated trucks. Due to consistent budget cuts in the sanitation sector, old trucks with dangerous mechanisms are still being used despite requests to overhaul the vehicles. Issues with brakes fires starting in the hopper and radiator breakdowns were common occurrences.

These are essential jobs, as proven by the COVID-19 pandemic that’s shaken NYC to its core. The disposal of dangerous unsanitary trash is more necessary than ever. Most sanitation workers have a strong sense of duty to the public and would never dream of quitting their jobs. 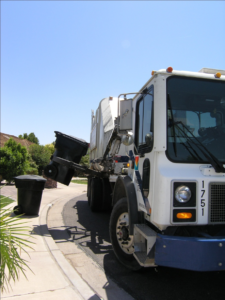 As more awareness is raised about the working conditions they’re under, more progress is being made. It’s the pandemic that has been bringing attention to essential workers like those who work in sanitation.

OSHA and the CDC are calling for a range of measures to be implemented. This includes adequate safety and protection gear and fully functional trucks to be provided to workers. Moreover, there are calls to create better regulations for garbage disposal that will reduce the risk of unsafe trash handling immensely.

Different protocols for sharp objects and other dangerous materials are being developed for implementation.

There are also concerns that people who don’t know what the job entails are going into the profession. The Sanitation Department needs individuals that are mentally and physically equipped for this job.

When potential workers sit for their NYS civil service exams, they need to know everything that goes into the job. At Civil Service Success, we ensure that the responsible citizens that come to us for prep classes for civil services are trained in all the details of performing their future jobs.

Our instructors are retired workers from the same field, and they use these moments to mentor not only our civil service applicants but also our NYC firefighter, police, and court officer exam trainees. This is part of our continued service to the residents of NYC, Westchester, Nassau County, Suffolk, and other nearby areas.